Why women in MI may not wear fashion hats. What makes women follow a trend in fashion or not?

I am currently vacationing in Michigan.  I was talking to some ladies who reside in MI about how casual the dress code is here. They were talking about the use of hats as fashion accessories and how 'nobody wears them' in MI as fashion accessories. They of course talked about the garden hats and hiking hats that are more worn as SPF protectors rather than as fashion.
When I am selling hats I find that women in a particular region don't wear hats. I often will ask ,"So what has to happen before this changes"? One response was a belief that at some time in the future a group of brave women will start adopting the practice of wearing fashion hats and when they see more people in public doing this they will join in but not until then. Many women express the concern about 'standing out' by being the only one wearing a hat. One comment was that they need a 'Hat society' movement to mirror the Red Hat Society movement; they are looking for public permission to wear hats again..
Are we sheep? So is this true about other trends? What makes women take the risk and wear something new and different than their local norm? How many hat wearing women in a group of say fifty women would have to be seen wearing hats before others will join in?
Just so you know I do wear hats occasionally in an area where it is not the norm but not always. I like to look chic but not look like a show off. It is a slim line that I don't want to cross. I personally think that public events are the perfect place to start wearing hats. Events can be community outdoor activities such as, craft fairs, flea markets, sports events, picnics. The wearing of the hat can be a nod that this is a special activity and wearing a hat is acknowledging the efforts of the event workers so you in a way are 'dressed up'.
There are so many bloggers that have made careers out of giving women high self esteem and to go for self expression despite what others might think for instance Already Pretty  is one of them. I know that Michigan as a whole has a depressed economy more in some locations than others. Does economic depression equate to conservative self expression or is it a lack of economic resources that depletes any chance of spending what little resources available on something as frivolous as a fashion hat? If so I get that.
What conclusions can I draw from my observations, that Michigan is economically depressed, in a lot of localities, that women in MI are feeling the consequences and adapting their lifestyles accordingly and that following trends are not necessarily about self-esteem and the need for self expression. So it seems that economic base will have an great influence on whether or not someone will try a new trend especially if it is not a necessity. Taking a big jump here perhaps I need to buy a US made car the next time I need a car to hopefully trickle down to improve the MI economy and therefore MI women will be able to afford to follow some new trends like fashion hats...

Hair do update growing hair out into a Bob, July update 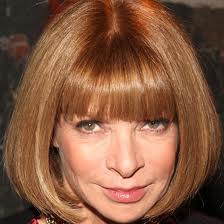 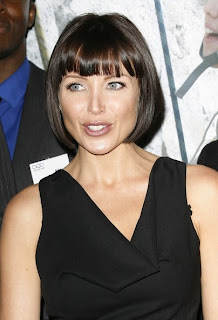 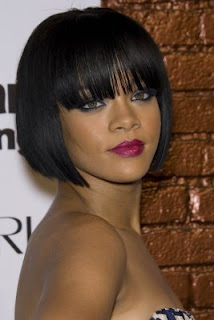 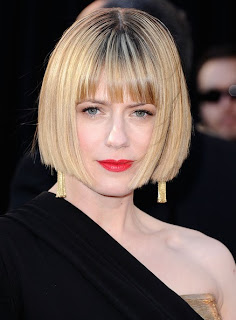 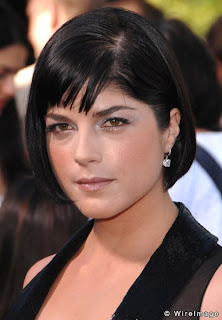 The above ladies are my Bob 'Mentors'. I admit that I am not a Hollywood star nor nearly as young but I do have hair. I also did not anticipate the effect humidity would have on maintaining this haircut. Mine is a big frizz ball by 11:00 am. I am using anti-frizz shampoo and conditioner and flat-ironing it each morning. I am thinking about going curly because why fight the natural tendency of my hair to curl. Maybe I can do my hair like the last picture. She has a fuller face and about the same volume of hair as me. What would you do?

Having a split style personality

Fancy on top casual on the bottom. I have seen this mix lately and I like it. I think it breaks up that matchy matchy mentality I have been stuck in for too long. It is a lay over from when I was a kid and I always had to change out of my 'good clothes' after I came home from school.
So I have been pairing dressier blouses with very casual pants. Normally I would pair the pants with T-shirts not too creative. The photo's below are two incidences where I have done this.
I have done the opposite as well,I put the dressy skirt on the bottom and put the casual knit top on top. Still a split but I think that option will work too. So do you have a style split personality too?

Posted by Adrienne at 2:11 PM No comments:

Closet purge what to get rid of how to plan your looks for the season.

I wanted to organize my clothing for the coming summer months.  I decided to use Imogene Lamport e-book "Five Step Formula for a Fabulous Wardrobe on a Budget" to try her suggested process.
The first step is to know who you are and what your wardrobe needs are. I am retired so I need mostly casual clothing. Some smart casual and a few special occasion outfits. I will not need traditional business or even relaxed business outfits for the most part during the summer. Even if I go to see a lawyer I won't need a suit...
The next step is to organize your ideas onto an idea board. I like this part of the activity. I cut out pictures from magazines or clothing catalogues and put together my ideas on a poster board. This gives me a visual reference as to what types of outfits I want to wear. This is easier for me to do than to list a bunch of words that I think describe my look. I always can come up with the list but do they really reflect my personality. The idea is to match your personality to your clothing so that they are saying the same thing.
My list of words were: artsy-creative, dependable, friendly, warm, polished, chic, humerous.
So what would that look like in clothing: that is right I am clueless? So see why cutting out the pictures works better for me.
In case you are interested I used pictures from, Chico's, J.Jill, Cabi Canary (on line clothing), Pinterest some of the rugged clothing lines as well.
The purging of the clothing gets so much easier when you have a style direction.
Since this clothing organization is really for the next 3 months it is going to be very hot and humid here. I have no weddings to go to so I don't need any special occasions outfits either.
I put all of my jackets and dress slacks in another closet I put all of my long sleeved knit tops folded up and away. I put all of my button down long sleeve shirts temporarily away too. I folded up all of my sweaters after I washed all of them. If I decide I need any of these as a cover for insides air conditioned places I can always add them back.
After I took all of these pieces out I was left with knit tops, short sleeved, sleeveless and cami tops, summer skirts, summer dresses, and numerous cotton pants and shorts. I have one summer weight sleeveless vest.
I like Imogene's suggestion to first sort your clothing into neutrals and like colors. For me it makes it easier to see what I have that might be put into a clothing capsule (organized group that relates by a color theme).
Once I did all of this I decided that I wanted to visually catalog my looks. My newest step was to use a app. I used Dress box an app I found on my  windows telephone.The software allows you to take pictures of your clothing and to organize them into outfits via the software. I just jumped to taking photos of outfits that I made based upon the pictures I cut out on my inspiration board.

My board ended up having skirt looks, rolled up jeans short looks, cargo short looks, boyfriend jeans looks, and colored ankle pants looks and one dress look.
When I color sorted my clothing I came up with three distinct groups. One a neutral group, the other a orange coral group and the last a turquoise/teal group. I now have 3 capsules based upon these colors. Funny how they all neatly fit into these groups. So here are some pictures of my collage inspiration pictures and my first outfit look.

This is a dressy blouse with very casual pants and just some keds in the same tone and the pants. I had not worn this blouse in a while but in this combination I think it works.
And today I am going visible on  Not Dead Yet Style.
Posted by Adrienne at 10:16 AM 3 comments: